skip to main | skip to sidebar

Posted by francis at 1:52 AM No comments: 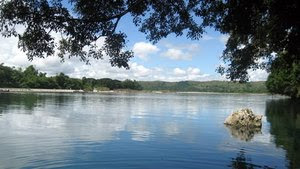 It has a natural cathedral located at the first chamber, which was turned into a chapel by the local people. The conditions inside the cave cause stalactites and stalagmites, particularly in the deeper chambers.

Every chamber has natural crevices, which let light get into the cave, serving as illumination for the otherwise dark areas of the place. 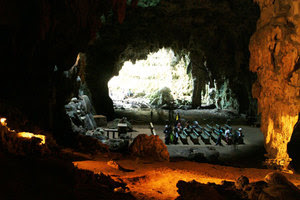 Callao Cave is the best known tourist attraction of Cagayan Province. It is located in Barangays Parabba and Quibal, in the town of Peñablanca, a thirty minute drive from the provincial capitol Tuguegarao.

Callao Cave is uncomplicated to explore but requires little test of patience as you go up the stair with close to 200 steps before seeing the colossal limestone and rock formations inside.

It is made up of seven chambers and various

formations: the Column, Chapel, Skeleton, Elephant’s Head, Praying Angel, Rocket, Lion’s Head and Dog’s Head Formations. The Chapel, being featured in many tourism ads and postcards, is the main attraction of the cave (and of the whole Cagayan), it is a chamber turned into a cathedral by the locals. The place draws a dramatic picture as the skylight illuminates the hall through its opening.
While in the area, one must also try a wooden boat ride in Mororan (Minoran) River passing through small rainforest, a bat cave, scenic rocky cliffs and picturesque river banks with crystal clear water ideal for swimming.

Other places you must visit in Tuguegarrao:

Jackpot Cave – Located at Sitio Tumallo, Barangay Quibal in Peñablanca. At 115 meters, it is the second deepest cave in the Philippines. The cave has a walking-size passage, shafts and drops of varying depths that provide for a lot of rope works. Odessa-Tumbali Cave System – Located at Sitio Abbenditan, Barangay Quibal in Peñablanca. At 12.60 kilometers, it is the third longest cave in the Philippines. Known locally as Abbenditan Cave, it is active, flood prone, and provides excellent wet sport caving. San Carlos Cave – Probably one of the toughest caves the Philippines could offer. When inside the cave, spelunkers will learn the art of cave crawling. A chamber called “Ice Cream Parlor” contains a cluster of white stalagmites that resemble scooped ice cream. The “John the Baptist” chamber is a very deep underwater sump that one has to take a deep breath and swim to the other side of the chamber. Sharp and rough stones could scratch the skin and tear clothing.


How to get there

By Land:
From Manila, Victory Liner, Baliwag , EMC Bus Company, Auto Bus Company and Florida Liner have daily trips to Cagayan Capitol everyday almost every hour. It is around 485 kilometers north of Metro Manila; travel time is about 10-13hours and the fare is approximately P600.0/ $12.

If you are coming from Tabuk, jeepneys are available in Kalabaw Intersection (in front of St. William Cathedral), fare is P55.00/$2. From Ilocos and Abra, GMW Liner and Florida Liner have trips to Tuguegarao.
Posted by francis at 11:30 PM No comments: